After playing for an hour or two, my main screen blackscreened itself. After this, the nvidia driver crashed and the two monitors surrounding my main screen lost the color settings and resolution.

I was not that concerned, as this can happen with outdated drivers. In the past I often played with old drivers so I was somewhat used to blackscreens. So I uninstalled the drivers, cleaned the leftovers by DDU, Display Driver Uninstaller and after a 10 second restart, I was playing my games again.

Then it happened again

A new blackscreen appeared. This time I started to be a little confused. I thought, "maybe it was just a typical Windows error with driver installation, I'll do it again".. But then just after cleanup and installation, I opened my Steam and Chrome another blackscreen appeared. Things started to get scary, as just a month ago I purchased a new 27" Asus TUF Gaming VG27BQ 165Hz monitor. Is there something wrong with the monitor, do I have to RMA it?

The Asus 27" TUF Gaming VG27BQ, 165Hz (OC) WQHD is a 165Hz monitor. So I reduced the frequency to 144Hz as Asus had stated that overclocking might cause issues. Nothing interesting happened so I was thinking, maybe nvidia drivers don't like 3 monitor setups, some other users had this issue too. But I didn't give up and I found myself looking for other solutions. I simply cannot give up 3 monitors. You can't downgrade from 165Hz to 144Hz, you can't either downgrade from 144Hz to 60Hz.

Years ago when I bought a GTX card from a retail shop in Finland, the GPU was packed with a faulty HDMI cable. As I was using a cable shipped with the ASUS TUF monitor, I changed the display from DPI (to achieve 165Hz) to HDMI (which can do only 144Hz). After a brief investigation I was sitting, again, with a black screened monitor.

Time to do some advanced investigation

Whenever there's something strange happening in your PC, you might want to check out the Windows Event Log. This piece of software actually reigisters all your actions in one simple log. From blue screen of deaths to USB device plugging. I was able to find out that the nvidia driver nvlddmkm stopped working and recovered, but not in full mode. After reboot, the nvidia driver was unable to boot.

About the shunt mod

As my Titan X is shunt modded (don't do it, but I still recommend doing it), could the GPU's power delivery system be faulty? Last year I had an issue with the GPU clockspeed, I couldn't reach higher speeds than ~800Mhz on the core clock. Resoldering the shunt mod did not help, but a double check was not a bad option in this situation. 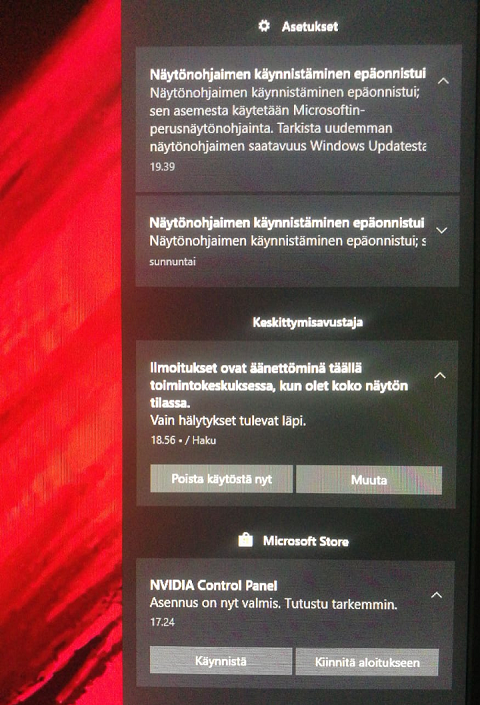 There's a GTX 960 4Gb and a RX560 4Gb in my 2nd and 3rd system. Somehow the RX560 had no issues running my setup at all. Of cours, games had to be set to different graphics settings. I only tried the RX560, when my friend Das Ahokas told me about the hot memory dies. I went to work, dropped my GPU to D.A.A.P.C.B (Das Ahokas Advanced Personal Computer Builds Co.) so he could investigate it while I'm at work.

Dust removal from the GPU

After a long investigation Das Ahokas recommended me to install external heat and sink pads to the memory dies. Believe or not, when I did this at home and started playing games, no black screens appeared ever again.

So the cause of the blackscreens were definitely the overheating memory dies. I was so close to replace the GTX Titan X as most of the fix it yourself options were used.